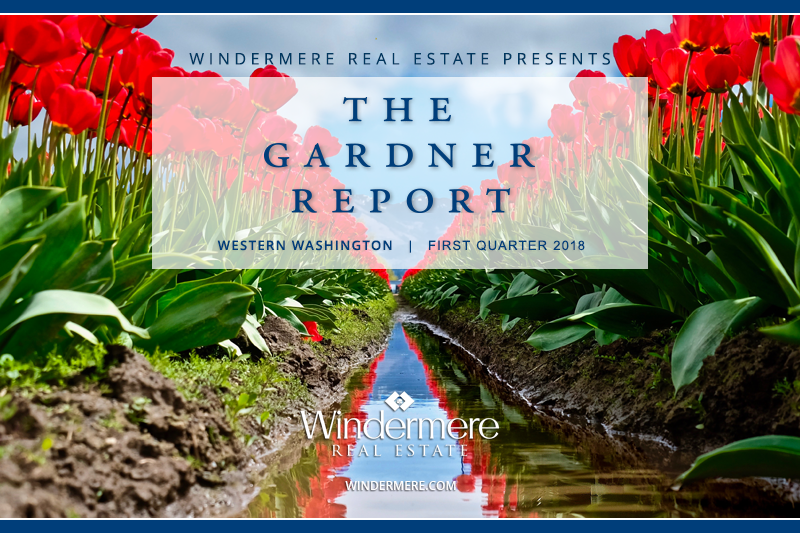 The following analysis of the Western Washington real estate market is provided by Windermere Real Estate Chief Economist Matthew Gardner. We hope that this information may assist you with making better-informed real estate decisions.

The Washington State economy added 96,900 new jobs over the past 12 months, representing an annual growth rate of 2.9%—still solidly above the national rate of 1.5%. Most of the employment gains were in the private sector, which rose by 3.4%. The public sector saw a more modest increase of 1.6%.

The strongest growth was in the Education & Health Services and Retail sectors, which added 17,300 and 16,700 jobs, respectively. The Construction sector added 10,900 new positions over the past 12 months.

Even with solid increases in jobs, the state unemployment rate held steady at 4.7%—a figure that has not moved since September of last year.

I expect the Washington State economy to continue adding jobs in 2018, but not at the same rate as last year given that we are nearing full employment. That said, we will still outperform the nation as a whole when it comes to job creation.

This speedometer reflects the state of the region’s housing market using housing inventory, price gains, home sales, interest rates, and larger economic factors. For the first quarter of 2018, I have left the needle at the same point as fourth quarter of last year. Price growth remains strong even as sales activity slowed. All things being equal, 2018 is setting itself up to be another very good year for sellers but, unfortunately, not for buyers who will still see stiff competition for the limited number of available homes for sale.

Matthew Gardner is the Chief Economist for Windermere Real Estate, specializing in residential market analysis, commercial/industrial market analysis, financial analysis, and land use and regional economics. He is the former Principal of Gardner Economics, and has more than 30 years of professional experience both in the U.S. and U.K.

Related Articles
Local Market News Amid coronavirus concerns, Seattle homebuying frenzy continues The condo a quarter-mile away from the Life Care Center of Kirkland — the long-term care facility at the epicenter of the U.S. novel coronavirus outbreak — hit the market at $365,000 last week, one day after the first resident of the nearby facility died of the flulike illness. By Monday, roughly 34 groups of […]
Local Market News Eastside 2020 Growth Forecast Another banner year for the region has brought tremendous prosperity across a breadth of industries, a wealth of new jobs, flourishing tourism, and the welcoming of several large businesses into our cities. So, how is the Eastside poised to begin a new decade? Will this growth continue? To find out, 425 Business ditched the crystal […]
Real Estate To Buy New or Old, That is the Question We are often asked, “Which is the better buy, a newer or older home?” Our answer: It all depends on your needs and personal preferences. We decided to put together a list of the six biggest differences between newer and older homes: The neighborhood Surprisingly, one of the biggest factors in choosing a new home […]