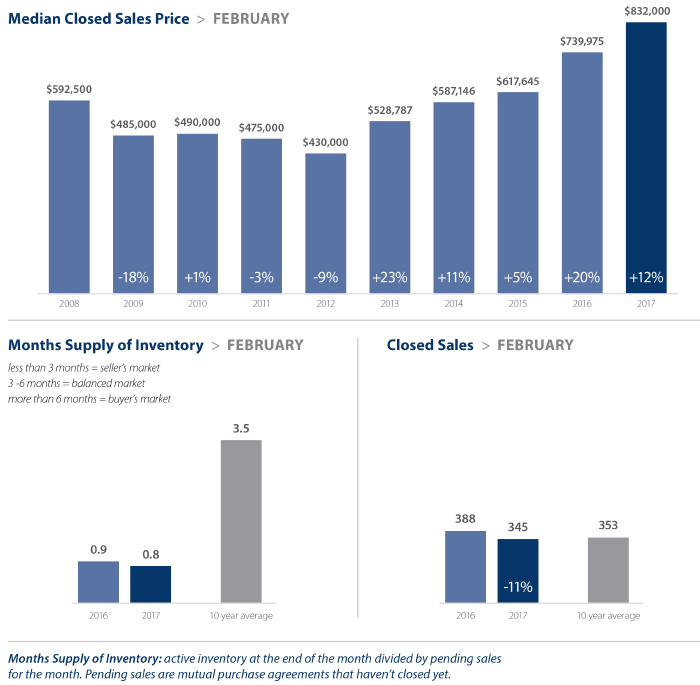 Home prices are growing faster in our region than anywhere else in the country. After a brief slowdown last month, home prices in February jumped to new record highs. The reason? The lowest number of homes for sale on record. The surge in prices came well ahead of the normal seasonal spring uptick, adding even greater urgency among buyers competing for already severely limited inventory. It remains to be seen if the predicted hike in interest rates will help moderate the market. For now, sellers are calling the shots.

The Eastside, always the most expensive area in King County, set a new price record in February. The median price for homes sold in February soared 12 percent to $832,000. That’s nearly $100,000 more than the same time last year. With less than one month of available inventory, this seller’s market is expected to continue for quite some time.

A recent trend of slowing price growth reversed itself in February. The number of homes for sale in King County was at its lowest point since 2000, when records first started being tracked. That is down 25 percent from a year ago. The deep shortage of inventory resulted in a sharp increase in prices. The median price of a single-family home was up 9 percent over last year to $560,000.

The median price of a single-family home in the city increased 5 percent over a year ago to $675,000, another all-time high. Prices here have nearly doubled over the last five years. While areas of King County outside of Seattle are more affordable, prices there are growing even faster. The median price of homes in North, Southwest and Southeast King County all increased by double-digits in February.

After a softening of price increases over the past few months, Snohomish County saw record high prices in February. The median price of a single-family home jumped 15 percent as compared to a year ago to $412,500. With less than one month of supply in the county, brokers expect prices to remain strong.