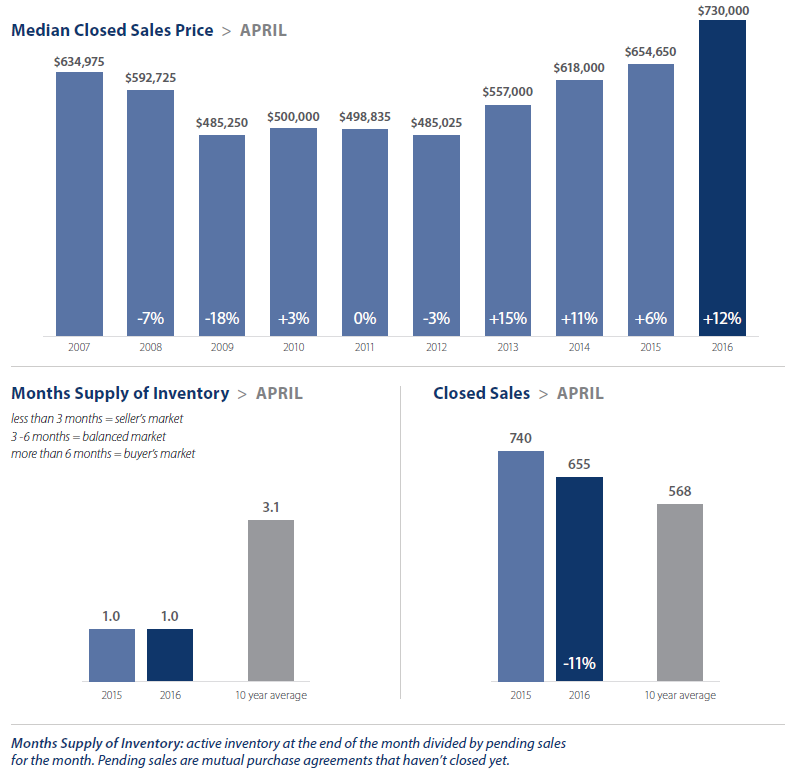 The supply of homes for sale in April was up over March, indicating that more sellers are deciding to list their homes. But with less than a month of inventory available in the area, it’s still a seller’s market. While prices were up over last year, the increases aren’t as lofty as they were in the first quarter of this year. Buyers looking for affordable housing continue to push their search outside the more expensive urban cores.

At $730,000, the median price of a home on the Eastside was up 11 percent over last year. That figure was down slightly from February and March, suggesting that prices may be moderating. Competition for homes has not moderated. Brokers continue to report homes on the Eastside selling very quickly and often for over asking price.

After breaking records for home prices in February and March, King County reached a new record-high in April. The median price of a single-family home was $540,000, a 12 percent increase over the same time last year. The more affordable areas in the south and north ends of the county saw the greatest increases, with home prices climbing almost 20 percent in these outlying areas.

Seattle continues to have the tightest inventory of homes in King County. An influx of young, well-paid technology workers has fueled demand for homes close to the city. The median price of a single-family home increased 15 percent over a year ago to $637,250. But like the Eastside, that number was down slightly from February and March.

Snohomish County posted more moderate price gains than King County. The price of a single-family home increased just 4 percent over last year to $375,000, down from a median of $385,000 last month. With prices here a third less than in King County, some buyers are willing to trade a longer commute for a more affordable home.